Many people wouldn’t sit down to write a raw and truthful blog post about their biggest insecurity, the one thing they absolutely detest about themselves. I think the reason I’m writing this is more for myself. A sort of escape from thinking and thinking and thinking about it every day. I genuinely don’t think anyone (unless they experience it) understands just how difficult acne is. Now, I don’t want anyone feeling sorry for me and not for one second do I want anyone sympathising me. This isn’t a pathetic cry for help it’s the truth about acne, how it impacts your everyday basic life and how it changes you. Ok I sound so dramatic already but I honestly believe once you read this blog post, your perspective will entirely shift, and you will no longer take for granted the skin you’re in.

To cut a long and tragic story short, by the time I reached year 10 it was so heavily cystic that my skin hurt to touch. The spots even disfigured the shape of my face around my jaw line and mouth. Everytime I spoke to someone, they analysed my face and never made eye contact with me. Do you actually know how hideous it is to even be talking to your teacher and they’re glancing at your acne? It’s de-moralising to say the least, especially from a fully grown adult. I can also remember comments that got made like how can you forget the things people say about your biggest insecurity? The worst was “get away from me you’ll give me a rash with your spotty face” and just little remarks like “spotty” and “shut up with your spotty face”. The thing is, they’re not even that nasty of comments… it’s just when it’s about your biggest insecurity that you’re trying so hard to get rid of, it really is a kick in the teeth.

After courses of tetracycline and multiple bleaching products which I also had to start slapping onto my back because the acne moved to there, I became immune to everything. Antibiotics? Done. Bleaching cream? Done. A contraceptive pill which killed women and got banned in France? And also made one boob bigger than the other in less than one week? Done. So, here I was in Year 11 getting ready for prom with a crumpet face, spots smothered on my back, shoulders, ARMS, chest and neck, and of course I got a backless dress. My friend helped me cover them with concealer and foundation but up to that point I never actually wore makeup in school due to the fact it actually made my acne appear 10x worse. Little did I know at the time there were some little lumpy pricks that were hiding in plain sight… but oh no. When you slap the foundation on, they come out to play.

So by the time I reached college, I was so depressed with my skin that I wore turtle neck tops everywhere. Long sleeved tops in summer and everything had to be high neck. I always wore a scarf, I was so paranoid when my t-shirt slipped off my shoulder because I would immediately think everyone was looking at my bacne. I felt disgusting. My face was so disfigured and horrific that I actually just cried at night when I took my makeup off. Also, my makeup was disgusting. It was brown, grey and so thick it looked like you could scrape it with your fingernail and it would curdle away in a thick strip like ribbon curls on scissors.

I’m not candy coating this. And I’m not ashamed of how my acne was. Here’s some pictures just to show you just how bad it was and how it disfigured my face. The worst part is, all these pictures were from my second course of roaccutane: the apparent “miracle acne drug that only 1% of medication-takers’ acne returns”. This wasn’t even the worst part of it.

So how does this link to makeup? Well, this was my motivation. If you read my about page, my acne motivated me to feel “beautiful”, and makeup was my sort of escape from feeling ugly. But it still looked absolutely hideous due to my acne, so what could I do?

I was offered roaccutane in 2014. I didn’t want to take it due to the suicide death toll and the death of a teenager from drastic liver failure. But unless you’re in the situation of having acne so bad, you will do anything to get rid of it. After 4 months of enduring the side effects and the mood swings, my skin slowly got better and better and better. My confidence grew, my makeup abilities drastically improved. You see, it wasn’t that I was bad at makeup, it was my skin was bad at looking good with makeup. Imagine trying to draw on tarmac, compared to a canvas, which would look better? So, here’s a picture of me looking happy and like a drowned rat from my holiday after my second course of roaccutane:

This isn’t airbrushed. It is not touched up and it is not edited one bit. It really did THAT. Roaccutane was the miracle I always wanted. I even left the house with no makeup on!!!!!!!! The confidence surge it gave me was surreal. Heck, I even landed myself with a boyfriend in 2015 who I’m still with now! Anyway, the entire purpose of this blog post was to actually discuss the side effects of roaccutane and how it works. Instead, I went on some massive tangent about my high school years of when I was spotty as hell and now I feel sorry for myself lol. Oops.

So. To be on roaccutane you have to be referred by a doc first. You have to lay it on thick. Say how depressed you are and how down you are… but in my case, I wasn’t lying. I then went on a six month waiting list. I had to have pregnancy tests every month, I wasn’t allowed to take the tablet unless I was on a contraceptive pill because the drug can cause huge disfigurements to unborn children. And if you do get pregnant, the pregnancy has to be terminated immediately which could be extremely traumatic for someone already taking a depressant like roaccutane. Once that was out of the way, I was told I would get chapped lips, have monthly liver checks, dry scalp, dry nose, nose bleeds, dry body, I can’t wax or it’ll rip my skin off, I can’t stay in the sun too long or I will frazzle. No sun beds. No false nails (I went against this and got a cuticle infection from the Chinese shop in town. Never again). And then I got told there’s a chance of depression, mood swings, dryness EVERYWHERE. Yes, use your imagination. EVERYTHING dried out like a shrivelled prune. Also, I got told I cannot drink because in the future I will suffer bad liver failure and damage. IT WAS THE WORST FOUR TO SIX MONTHS OF MY LIFE. But I came out on top, with nice skin and a big smile.

Roaccutane kept the acne off my back, shoulders, neck and chest and arms. However, it shortly came back only after 4 months of taking the medication. Roaccutane works by targeting the oil in your pores called sebum. This oil is one of the root causes of acne due to some people withholding a mass production of this particular oil, hence why many individuals with acne tend to have oily, olive skin – due to sebum production being increasingly common within olive skinned people. What roaccutane does, is it is processed through the liver and targets the sebum glands. Imagine a little sebum gland in your pore being absolutely shrivelled to death by roaccutane. Then, any little volcanic eruptions that are lying dormant under your skin, erupt TF up!!! Honestly, I have never seen anything like it. Roaccutane is the syringe of acne, pushing the acne out and delivering you a nice plate of inverted crumpet face ft. a nice lump biscuit face. Once this process is over, the surfaced acne disappears and heals over time. And roaccutane closes your pores, demolishing blackheads and open pores and then annihilates the sebum production.

Although roaccutane faced me with many of the side effects, I can happily say it changed the way I live. I can now wear the clothes I want, I am a makeup blogger who has a huge passion for her makeup, I learnt makeup artistry myself and I allowed others who suffered with acne to feel beautiful by doing their makeup for them. What better way to get your makeup done than by someone who was able to cover acne for 7 years? I do also want to point out that people in the world have it far worse off than me with many issues in their life, but for me, this has been my biggest insecurity so far in my life.

Okay, so this blog post turned out way more personal than I intended. And my mum looked over my shoulder and said I should be wary of posting this because of the disturbing images of my acne and how nasty people can be. To be honest, that’s how I used to look. I don’t look like that anymore and I’m not ashamed in the slightest to post these images. I just want people to know that I am back on roaccutane again for the third time. And the bottom right picture in the collage is actually my face now. You shouldn’t have to suffer with acne on your own because I know how soul-destroying it actually is and how it really does affect your day to day life. Also, the ones who are so fast to comment on it are the ones who have never endured it. I’m always here to answer questions on the best creams, tablets or ways to reduce acne. I wanted to break the distorted reality of Instagram within the make-up industry: it can be so falsely advertised and interpreted so flawlessly. Everyone suffers with something. I used my insecurity to better myself, and it brought me to where I am today: sat in my kitchen on a Friday night writing this soppy ass blog post.

Any questions? Don’t be afraid to ask. You’ve seen how open I’ve been about this. You can be too! 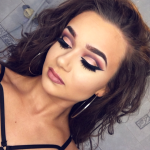 This site uses Akismet to reduce spam. Learn how your comment data is processed.

My passion for makeup started due to enduring years of severe acne. I learnt the art of makeup to express myself and allow myself to feel more confident. That is when I realised if I can do this for myself, I can do it for others too.

END_OF_DOCUMENT_TOKEN_TO_BE_REPLACED

Breaking out from the …

I won an Enterprise …